A Kiss For The Petals - Remembering How We Met 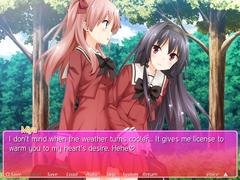 The season is Fall... as the uniforms transition from Summer to Winter garments, Risa suddenly has a pang of nostalgia. It was this very uniform she was wearing on her first day at St. Michael’s... The day she met her future girlfriend Miya. Now the two of them share a passionate life as a couple living in Risa’s apartment, but there was a time in their relationship when the very sight of one another would be enough to set off an endless bout of arguing. From Risa’s point of view, it all started with her just trying to get Miya to come to class... And even now with the two of them going out, the chronically truant girl has failed to mend her ways. Remembering those days elicits a faint laugh from Risa. Sitting alongside her, Miya reacts to Risa’s sudden outburst with a puzzled expression. "I was just thinking back... About when we first met." It was a beautiful spring day, with sakura petals dancing in the air. The day of her unforgettable first encounter with Miya...

Update to Ren'Py 6.99.10 per developer recommendation. 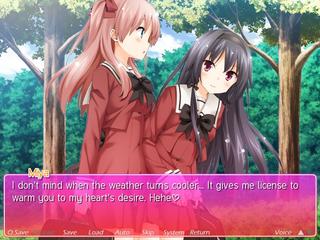