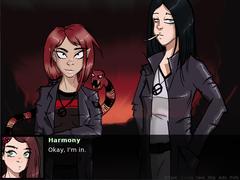 A brief adventure through Hell and back. Except we never actually get back. And we don't get very far through Hell, either. Come to think of it, it's not even called 'Hell' in this game. So, 'a brief adventure with an inappropriate title' then. The first act in a new underworld comedy adventure series, introducing the characters and setting the stage for what's to come. Features some strong language. Excepting sound effects, all resources used in this game were created from scratch in 48 hours for the 'Pirate Kart V' event in February 2012.